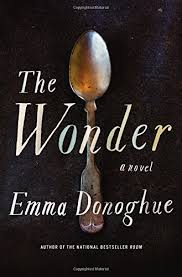 When I was young, there was this story a missionary told my youth group. As a young girl in Africa, she was sitting under a tree in the yard where her family lived and served. Her father came out of the house and called to her. He told her to slowly get up and walk toward him and not to make any sudden movements. She did as she was told with no questions asked. When she made it across the yard, she looked back to where she sat and there was a very large, poisonous snake in the tree.

As I listened to this story, I knew even then that I would have died. I would have asked all kinds of questions. Why? What’s wrong? What’s going on? That snake would have eaten me alive…assuming the snake was going to strike at all.

I believe the story was meant to be an illustration for faith in God and believing when he talks to us. As I read The Wonder, this story came to mind. Does God play an active role in the world? More than that, are miracles possible? Can a young girl live on nothing but “manna from heaven” and water?

Emma Donoghue’s book explores the mystical world of miracles and the struggles of faith. Here’s a quick synopsis:

It’s the middle of the 19th century and there are only so many options for a woman, if she isn’t married. Florence Nightingale’s work in the Crimea allowed many young woman to work as nurses. Those who worked under her and were trained by her, known as the Nightingales, were highly sought after. Lib Wright, a Nightingale, has taken a new position as a private nurse in Ireland for two weeks. Lib has struggled to find her place in the world since the war. When she arrives in a very small Irish village, she learns that she, a woman of science and nursing, will be observing a young girl who claims she hasn’t eaten in four months. Not since the day she turned 11 years-old. Lib, along with a Sister of Mercy, will keep watch over the girl for 24 hours a day to determine if the girl, is in fact, living on nothing as she claims. What begins as a job Lib sees as a waste of time, takes many turns as she learns more about the girl, her family, the village and the Roman Catholic  people around her.

While I’m not sure exactly what I was expecting, when I reached the 55 to 60% mark in the book, it took a turn or two I hadn’t expected. What started as story I thought would be a personal story of Lib exploring her faith, became a mystery, thriller and family drama I didn’t see coming.

There are many layers to this book. The career and life choices available to a woman in the mid-eighteenth century. The potato famine that decimated a generation in Ireland. The political corruption, which kept the poor poor and the rich rich. The burgeoning medical profession. There is a lot in this book to unpack.

The part I was most fascinated by was the question of faith. Faith in God and faith in people. Lib had little of either when she came to the village. In fact, she was ready to show Anna, the girl, for the lying, conniving child she believed her to be. She began to pick away at the poor family and look for the way they were helping Anna to get away with the sham of not eating for four months.

Through the first part of the book, though, Lib is drawn into conversation with the girl. Though they aren’t friends, Lib slowly learns more about her and her family. She makes notes in her nursing journal, attempting to keep the observation as “by the book” as she can. Through the interior monologue Lib keeps up as the narrator of the book, she peels back her own history. The added perspective of a newspaperman who befriends Lib allows her to further reveal her own story.

In childhood, Lib remembered, family seemed as necessary and inescapable as a ring of mountains. One never imagined that as the decades went by, one might drift into an unbounded country. It struck Lib now how alone in the world she was. –Emma Donoghue, The Wonder

Donoghue has crafted a story that weaves the story of a lonely nurse, the pain and longing of an 11 year-old girl and the need for a miracle of a nation still mourning the loss of a generation to starvation. The tapestry Donoghue has created in The Wonder is wondrous. It will leave you thinking long after you’ve turned the final page. It’s one of those “stay with you” kind of books.