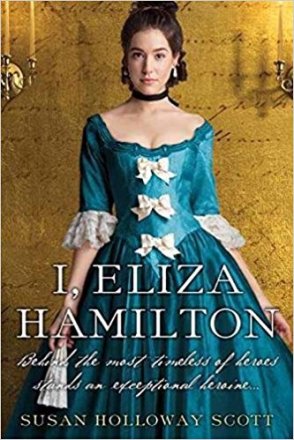 Pop culture is a funny thing. You never know what will take off and become the “new” thing. Once it does, you see it everywhere. Books, movies, music, social media. The story of Alexander Hamilton is the “it” thing right now. You’d have to be living under a rock not to know this. Early American history and the stories of the Founding Fathers have always been popular. Think John Adams and the story David McCullough told.

The interesting trend lately is giving voice to the women who were influential in the lives of the Founding Fathers. They were forces in their own rights–even within the boundaries polite society erected for them. Wives, daughters, mothers, sisters who held down the fort during war and the early days of a fledgling country.

Not too long ago, I read America’s First Daughter by Stephanie Dray and Laura Kamoie. There are a lot of similarities between these two books and I would imagine a lot of books that are, in essence, fictional historical biographies. If you like this genre, then you’ll like I, Eliza Hamilton.

Elizabeth Schuyler was raised in upper New York during the pre-Revolutionary days by a family of Dutch descent. Her father was a decorated general and wealthy man of Albany. Her mother a formidable soul who bore children well into her late 40s and early 50s. Eliza, as she was called, was the second child and spent much of her time helping her mother to run the household and care for her young siblings. That was the case, until she met a young colonel named Alexander Hamilton who was the aide-de-camp to General George Washington. It was chance meeting at her parent’s home and she never forgot him from that day. It wasn’t until two years later, in Morristown, the two spent time together and fell in love. Even though Alexander was known to be without a father and had little money to his name, Eliza talked her family into allowing their marriage. What follows are the ups and downs of any married life, with the notable backdrop of a man and woman in the middle of building a new nation. Through pregnancies, financial problems and the nation’s first sex scandal. So, really, like no marriage I know.

The struggle with fictional historical biography is that we all know how it ends. Nobody walked into Titanic thinking the ship might just make it. So, I knew, in the end, Alexander Hamilton’s life would end abruptly. It is no easy feat to create a novel based on such well-known history and, especially, for a much maligned character like Alexander. Yet, Scott created a character in Eliza Hamilton that made me feel the desperation of the early years of the nation when we were just a collection of states with no strong federal government. She made me feel the outright indignation of the attacks Hamilton endured, and Eliza as well, from those who did not like him or his ideas. She also made me so angry at Alexander Hamilton at moments.

Scott also captured the close relationship between Eliza and Hamilton. She was his sounding board, his confidante and often the person to pen his final drafts of important documents. In addition, she kept a mercurial personality grounded. She was the backbone of their marriage and spent her life making his dreams of government service possible. I can’t imagine the strength this takes.

I, Eliza Hamilton is a great fictional historical biography. As with many in this genre, the book covers a long timeline and can, at moments, feel slow or weighed down by required historical detail. However, if you like this genre, this is a great addition to your book shelves.

Thank you to the publisher and NetGalley for providing me an early copy for a fair and honest review.