The camels at Giza are quite a sight. Photo by Courtney Marquez.

The first piece of advice I got when I arrived in Cairo was to avoid getting on the camels at the Giza pyramid site. The camel wranglers will quote you one price and then double it when you want to finally get off their humped moneymaker.

The second piece of advice was to not drink the water coming from the tap in my flat because, well, it was highly processed Nile water that every wildebeest and hippo bathed in from the middle of Africa to Cairo. My weak American system wouldn’t be able to take it.

My first view of the great Nile River was in the middle of a hot August night when the wind from Saudi Arabia and the Red Sea made the air difficult to breathe. In the moment when I stepped from the Lufthansa flight and walked to Egypt’s customs desk with a man in flowing white robes and red kifaya and a woman garbed from head to toe in black with only a set of gorgeous brown eyes showing, I thought to myself “what am I doing here”?

It’s been more than ten years since I made that trek to Egypt to attend school at the American University in Cairo. In all I spent six months living in Cairo and traveling the Middle East. My time there has been on my mind a lot in the last two years with all the unrest. And, the truth is, the time there made a pretty deep impact on me.

So, I thought it would be fun to tell a few tales over the coming months. They will be tales of the good, the bad and the ugly. Some made me laugh and some made me cry…then laugh later. More than anything, the feeling of “otherness” you feel living in a place where you are learning rudimentary words and how to avoid offending the people you meet is something I am glad I experienced.

And, come on, it was Egypt. Home of the pyramids. The last place the Nile flows before emptying into the Mediterranean. The place where humans built a great empire.

It was also hot in August. My flat mates and I were able to piece together from the morning news in Arabic that we arrived just at the end of the hot season. Even at night, when the desert would cool off, it was still stifling in August. Soon, around the first of September, the air flow would change and we’d be relieved by the winds from the Mediterranean. But, until that happened, we drank plenty of bottled water and took naps in the heat of the afternoon. 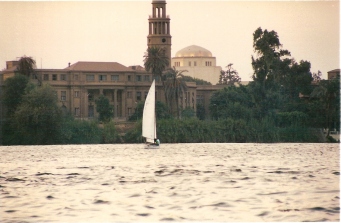 A view of the Nile River during an evening sail. Photo by Courtney Marquez.

Cairo came alive at night during this hot season. Soft lights came from the balconies and tea shops where Egypt’s population gathered to eat dinner and drink tea while watching the soap opera television shows or day’s news. Men in white skull caps and flowing robes would play chess while smoking their hookahs. Women walked in tight groups with their own skirts and head scarves.

The bizarre was the epicenter of these late evening activities. We would walk through the stalls teaming with barrels of spices or perfume shops where heavy scents of exotic flowers wafted from the doors. It was overwhelming for me, coming from the Midwest where there are rolling fields of hay and cattle can be the only thing you see for miles on the interstate.

The first three weeks were an overwhelming and exotic beginning to a wonderful adventure. I’ll share more in the next few weeks. Have you ever been on such a journey? Where did your wanderlust take you?