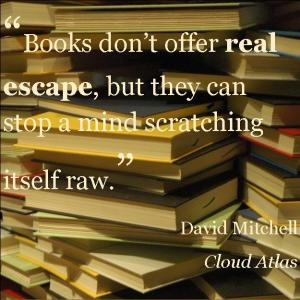 There are periods of time in one’s life which seem to no longer belong to that person. You look up and a month has passed. Or your plans to finally work toward that goal on your list are thwarted by some emergency or need of a loved one. Even more fun are the times when you do have a few hours and your are the master of your time and you’re so mentally fatigued that you feel the need to recharge.

And so, I’ve found my mind scratching itself raw.

The best solution in these situations, or so I’ve found in the past, is to lose myself in another world. Escape. Now, sometimes you can find real escape. A day hike. A day trip to some city or town you’ve never visited before.

But, being the book person I am, I’m always thrilled to have a new world to immerse myself in for a couple of hours each evening. And if life is really taxing, over a lunch hour.

This latest spate of mental rawness has been relieved with two new discoveries in books and television. 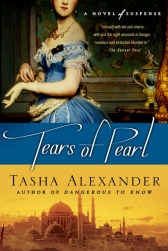 The fourth book in Tasha Alexander’s Lady Emily mysteries. A fun romp through Constantinople at the twilight of the Ottoman empire.

I was perusing Facebook the other day and Michelle Moran, an author of some of my favorites and someone you should check out, posted on her timeline about the release of a new Lady Emily mystery by Tasha Alexander.

A Victorian female sleuth? Color me intrigued. So, I hoped on my local library’s digital site and there was the first in the series. It is safe to say I was hooked in the first two chapters. Alexander introduces us to Lady Emily Ashton, a young widow who is only two years out of her first season in London society.

The Victorian woman is an interesting one. Women who were continuing to question the inequalities of their society, yet living within them because to be ostracized could be worse than death. These were the mothers and grandmothers of the women who would know what it meant to vote.

Lady Emily is a widow though. Alexander explains in a short note at the end of her first book why she chose to make Emily a widow. Widows are given a tidge more freedom. Just a tidge. They are also expected to react badly to the grief of losing their husbands. And Lady Emily takes full advantage of these things.

Having just finished the fourth installment of the series, there are a few things I really admire about Alexander’s writing.

Her ability to carry her characters through tough emotional situations and questions and they are not all neatly resolved and tucked away. Instead, Alexander brings the character through the emotion. Trust me. When you get to The Fatal Waltz, book three, you’ll feel me on this one. Whether it’s the intricacies of maintaining friendships with other women as you age, and who hasn’t dealt with this one, or the tough relationship with a mother whose expectations are chafing. Then there are the complicated relationships between men and women in an era when the separation of the sexes was taken very seriously.

Related to this, is Alexander’s willingness to allow her characters to mature and change. This is a tough one. You are drawn into a character because of who they are in the first two chapters. Yet it is important in a series that they change. Life is not static and no character should be. But, it is a tricky business changing much loved characters. Will every reader love every direction taken? No. They won’t. Are there moments when I slapped my head at Lady Emily’s mental thought process? Yep. But, I have those moments with my thought process, too.

One more thing. Alexander takes Lady Emily’s relationships with the women in her life very seriously. I enjoy the interplay between Lady Emily and her mother. Her best friend Ivy. Her new friend Margaret. Her eccentric friend Cecile. Each friend (and mother) draws something out of Emily and pushes her. There is great respect shown here to the relationships between women.

There is, of course, the beauty of the mystery in each book. They are a fun diversion, along with the lives of Lady Emily and her friends.

The titular Miss Fisher, a character based on Kerry Greenwood’s novels.

Thanks to my dear friend, Niki, and her parents. I found a new guilty pleasure to watch. The series, which is produced in Australia, is available on Netflix. Go watch the first episode…I’ll wait.

Are you hooked? I was. The hair. The clothing. The cars. The home decor. The music. I love it all.

Yes, you can draw the similarities between this and Lady Emily. Women. Detectives. But, really that’s where they stop.

I’ve read the first few books in Kerry Greenwood’s series about lady detective Phryne Fisher in 1928 Melbourne. They are good. I enjoyed them. But, the television show brings 1928 to life on the screen. I know, I know. I can read what I’m writing. I may be a bigger fan of the show then the books.

I have three episodes of series one left. I have no idea where I’ll get my hands on series two because Netflix doesn’t have them as yet. You may want to solve this problem before you get hooked.

And so, in moments when my mind is scratching itself raw from the stress of life, I’ve found a few diversions to help me escape for a few moments. A few precious moments. Whether the drawing room of a Victorian widow or the dance halls of 1928 Melbourne, both of these lady detectives are very diverting.

One thought on “Scratching oneself raw”