It was one of those books where you let out a pleasant sigh at the end. Or maybe you’re panting from the non-stop action. Can a book’s ending ever give you both? If it can, then “City of Jasmine” is that book.

City of Jasmine by Deanna Raybourn

I stumbled upon Deanna Raybourn’s book “Night of a Thousand Stars” late in 2014. It was listed on an “upcoming books we’re excited about list.” I picked it up. I loved it. As with all of you, my TBR is large, so I never made it back to other Raybourn books. Big mistake.

While I still stand by my 5 star rating of “Night of a Thousand Stars,” I wish I could give more to “City of Jasmine.” Both books are big on characters and setting. So much so, that I can’t decide which was better executed by Raybourn.

The star of “City of Jasmine” is really the country of Syria and the city of Damascus (just like “Night of a Thousand Stars after it). The magic of that city with its hidden courtyards, bustling souks, calls of prayer broadcast over its rooftops and the amazing people. I won’t get started on the food in this book, but needless to say I wouldn’t mind a companion cookbook. “City of Jasmine” captured everything about Damascus, and Syria, that I loved from my own travels there, but added the history and intrigue of the Levant in the 1920s.

Not only does Raybourn offer you all of this luscious setting, but she gives you characters enmeshed in the political turmoil of their day. Complicated characters who do and say things you wish they wouldn’t, but are only human. Characters as flawed as their time period after the destruction of WWI. A woman, Evie Starke, coming through a period of journeying to become who she must and a man, Gabriel, struggling to deal with decisions he’s made. And it is a delicious ride Raybourn takes her characters on through the air in Evie’s plane and on the camels of the Syrian desert.

Really, it’s a masterful combination achieved with stunning setting, flawed and loveable characters and a large helping of adventure, the perfect recipe that every author looks to create. 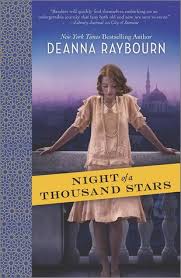 Night of a Thousand Stars by Deanna Raybourn

The plot centers on Evie Starke, a self-made aviatrix of the 1920s, who has spent five years coming to grips with the death of her husband, an adventurer said to have died during the sinking of the Lusitania. Their short love story, a four month marriage beginning on the night they met, was tempestuous and was headed for divorce when he died. Raybourn makes it no secret that Evie is still struggling with the lack of closure in their story. Things become complicated when she receives an anonymous note that contains only one thing…the only thing that could make Evie alter her current world tour by plane…a current picture of her dead husband. From there, the ride only becomes wilder with twists and turns to match the old city of Damascus itself.

I’m not sure I can recommend this book highly enough. You should then read “Night of a Thousand Stars.” After reading both, I’ve learned there is a prequel novella called “Whisper of Jasmine” that I’ll be downloading later. In addition, I’ve also started Raybourn’s Lady Julia Grey series that has hints of Tasha Alexander’s Lady Emily books. They are a smart, Victorian read.