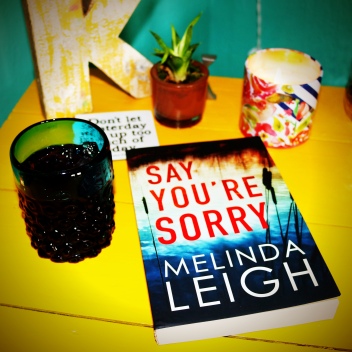 I’ll just get the obvious out-of-the-way. I LOVE Melinda Leigh’s books. Honestly, I can’t even remember how I stumbled upon her Midnight series, but I quickly devoured the first three, which were the only ones available at the time. I now pre-order her books as soon as they are available. I highly recommend all that I’ve read. Now, thus ends the general fan girl moment.

I’ve read books from two series, so far. The three books from the Midnight series: Midnight Exposure, Midnight Sacrifice and Midnight Betrayal. And the three books from the Scarlet Falls series: Hour of Need, Minutes to Kill and Seconds to Live. Each of these series if structured around a family of people. Each book follows one person and their story. It’s fun to read about them and see them pop back up in the other books.

With the fourth book in the Midnight series (Midnight Obsession) and this book, Say You’re Sorry, which is the first book in the Morgan Dane series, Leigh is making a departure from what I’ve read so far. She revisits the same two central characters from a previous book. And I’m really excited about it!

Say You’re Sorry is the first in a planned series that will follow lawyer Morgan Dane and her adventures in Scarlet Falls. Leigh takes us back to this upstate New York town where we first met the Barrett family. This time she takes us into the Dane family. We briefly met them in Seconds to Live. I love already knowing the peripheral characters! Here’s the premise of Say You’re Sorry.

Morgan Dane has spent the last two years raising her three daughters and mourning the loss of her husband, John, to an explosion in Iraq. In another time, she was a district attorney who put criminals behind bars. Now, she lives with her grandfather in her home town. Morgan has decided it’s time to head back to work and is interviewing for the assistant DA position in Scarlet Falls. Then, one night, her girl-next-door babysitter is found murdered by the lake. The prime suspect? Morgan’s neighbor boy, Nick. He’s spent time playing with her girls, mowing her lawn and playing chess with her grandfather. Morgan watches as the police chief, her new DA boss and the mayor throw Nick in jail. His only hope may be Morgan if he wants to prove his innocence. Morgan and the local PI, Lance Kruger, who is healing from an injury when he was on the police force. Did Nick kill Tessa? If he didn’t, who did?

The layered characters Leigh introduces with this series were great. Morgan’s grief still feels real, but Leigh shows a woman waking up and realizing it’s time to show her girls what it’s like to really live life and not just float through it. As she works Nick’s case and draws the attention of the police and criminals, you see a woman breaking free from the waves of grief. Morgan also finds a new path she wasn’t expecting, but I’ll let you read to discover her new calling in life.

She would never forget him or the love they had, but it was time to let him go. It was time to live.–Melinda Leigh, Say You’re Sorry

Leigh also draws in a former minor character from the Scarlet Falls series, Lance Kruger. He was shot in the leg in the prior books and is still recovering from the fallout of that injury. Now, he works for a retired policeman turned PI doing all kinds of work that comes their way. In addition, we get to learn more about his own troubled past without a father and with a mother who struggles with mental illness. At the start of the book, all Lance wants is to make it back to the force. With a little more recovery, it’s a real possibility. Yet, he’s really good at the PI work and the case Morgan brings him show that maybe his plan isn’t what he really wants.

With such layered characters, the main story of Say You’re Sorry felt nuanced and in-depth without being slow or heavy-handed. Leigh hops from perspective to perspective, so you get bits and pieces from the various parties. We start with the terror of Tessa’s last minutes on earth, so if some trigger warnings for those who don’t like violence.

Leigh also takes us into the mind of the killer. This is something she’s done in her other books and I find it really interesting. Seeing the crime and the world from their distorted worldview adds an interesting layer to the story. It also heightens tension in Say You’re Sorry, as Morgan discovers new clues in her investigation.

While Leigh wraps up the main conflict from Say You’re Sorry at the end, she leaves plenty open for the second in her series. I’m eager to dig in to Her Last Goodbye when it comes out in September. As you know, I’ve already pre-ordered, so I’ll be eagerly awaiting book mail!