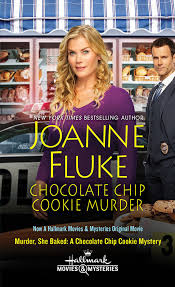 My mom has been talking about these movies she’s been watching while she works at her desk or putters around the house. Over the last couple of months, she’s told me a little about some plots and the characters. Come to find out, she’s been watching some Hallmark’s Movies and Mysteries channel and their films based on popular cozy mystery book series.

Now, when my TV is on, I tend to be pretty predictable about what I watch. If it isn’t the latest series I’m watching on Netflix or Amazon, it is probably reruns of Friends. I can listen to those while I fold laundry or clean up the living room.

The other night I decided to venture out of my norm and watch the first movie in the “Murder, She Baked” series that is based on Joanne Fluke’s Hanna Swensen novels. And boy howdy was that a mistake. My productivity ha

s taken a nose dive! I’ve DVR’d all the movies I can get and I’m now reading the series. So, I thought this would be a great installment for my “Books to Screen” posts.

The Similarities (and the differences):

I was really curious about the books after I watched my second movie in this series. How were they similar? Did they have the same charm as the movies? What liberties did they take with the plot to make it work for a 90 minute movie?

I’m not too proud to admit that I ran right out to my Kindle and bought the first book in the series and began reading then and there. Never mind, that I had a book sitting on my bedside table.

The basic premise for the books and movies are the same. Hannah Swensen owns her own bakery in a small town in Minnesota. She is single with a mother pushing her into the arms of any man, but especially Norman Rhodes, the new dentist in town. Like the books, the movies have a very fun and engaging cast of characters. The number and depth that you get to know them is curtailed in the movies, understandably for time’s sake.

As with the book series, there is Hannah’s mother and sister, Andrea, who keep her life a little crazy. However, the book series makes Hannah one of three sisters, so we don’t get to meet the youngest sister Michelle in the movies. There are also two suitors for Hannah’s romantic attentions, Norman and Mike, the new detective from Minneapolis.

While the movies bring Mike in early in the first film, the books ease you into this love triangle, if you want to call it that. This gives the movies that Hallmark touch of romance, but I really love the slow burn Fluke creates in her books. While I’m only on book four, there are more than 20, so I’m okay with Hannah taking her time.

The movies made by Hallmark have also come out in a different order than the books and they carry different names, at least after the third one. If I had to guess, that’s because they are a little out-of-order. But, after reading a few of the books I can tell the basic plot framework is there. The details are just reworked to fit the movie medium.

If you’re a sucker for detail, the adaptations might irritate you. I’ll admit the Hannah in my head doesn’t look the same as Alison Sweeney in the movies. I have a sneaking suspicion that as I continue to read the series, the Hannah of the books will become my mental image. The movies will be just a fun way to lose myself in Lake Eden a little more!

If you can, escape a little with both the movies and series. They’ll leave you hungry for more Hannah and the amazing cookie recipes in the books!