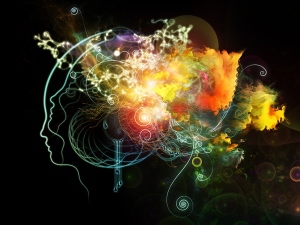 “Realms of Inner Thoughts” by agsandrew. Please use according to copyright licenses available on the website.

The most surprising epiphany for me this National Novel Writing Month has been a renewed appreciation for the act of creation. The feeling of typing words you weren’t even thinking until they started to flow from your fingers. The realization that characters who never existed before now have their own personalities, weaknesses and desires.

At moments, when I’m really on a roll and words are flowing, I can understand why the ancients believed that creation was bestowed upon you by the Muses. If you strain your hearing just a little, you can almost hear the voice of Calliope or Melpomene whispering in your ear.

My cousin sent me a text the other day telling me how much she enjoyed reading my blog and updates on writing. She said she couldn’t wait until she could read my book. I told her that writing was a little something magical and a whole lot of pushing yourself further than you thought you could go.

This is the other side of the magic and the other thing that surprises me on a daily basis. The pain of allowing the characters to go through unimaginable situations and horrible circumstances. As I’ve written there are certain scenes that didn’t feel right and in the end I’ve found it’s because I was fighting the decision a character knew they were going to make—and it would lead to even more pain.

The other night I wrote the scene my heart wanted for my character and later, as I was lying in bed, she whispered to me “It didn’t happen like that and you know it.” She was right, of course, and I went back the next day and the real scene came out—the one that ripped her heart out and crushed her. When I finished with the words, not all of them perfect yet, I was exhausted.

This aspect of writing has me thinking about Anais Nin and her feelings about creation.

“The violence and obscenity are left unadulterated, as manifestation of the mystery and pain which ever accompanies the act of creation.” –Anais Nin

Those who don’t create on a usual basis have a harder time understanding what this all means. As I was describing the thrill of writing words I never expected and being surprised by my characters to someone the other day, there was a look of skepticism on their face. I realize not everyone will understand the magic and pain of creation. That’s okay. I feel a little sorry for them though, missing such an amazing thrill and sense of wonder.

New glasses! I can see again! Tried a new color and shape. Loved a few of the @draperjames options, but these won the toss-up.
We’ve spent the weekend nursing a fever and nasty cough. I’m glad he’s feeling better. I’m not sad about the cuddles either.