As far as dystopian fiction goes, I haven’t read widely. Of course, I’ve read “The Hunger Games.” I also read the first in Veronica Roth’s series, “Divergent.” In those, though, there is still an order to society. There are rules, systems and leadership.

None of these exist in Shauna Granger’s new book, “World of Ash.” The only rule is survival. Before I get ahead of myself, let me offer a short synopsis.

The normal, teenage life Kat knew is no longer a reality. It is the stuff of memory and dreams. Everyone she loved is dead, taken by a fast moving plague and the bombs dropped by her own government in an attempt to contain it. She took to the road north just before Los Angeles was decimated. Now, she’s on the road alone trying to get to the only family she has left, or so she hopes, in Washington. “World of Ash” follows Kat’s harrowing journey through run-ins with gangs of other survivors, lack of food and water, and avoiding the Pestas who brought the plague in the first place. Along the way Kat finds Blue, a dog who becomes her protector, and Dylan, who finds a way into Kat’s heart. 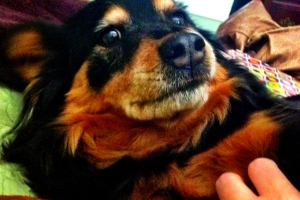 Blue, Kat’s adopted dog, stole my heart. Pictured is my dog, Max. I wouldn’t want any other dog to traverse the end of the world with than my Max.

As I read “World of Ash”, there were moments when I thought of classical odyssey stories. Recently, I read a children’s version of Homer’s “The Odyssey” with my son and I couldn’t help but see the parallels with the journey Kat was forced to take. With each mile Kat traveled, I kept wondering whether this would be a moment of idyll like Calypso’s island or if it would be more like the run-in with the Cyclops.

Granger has created a fast-paced book, which keeps you on the edge of your seat, or bed if you read it at night like I did. Tension fills the pages and before you know it, the clock strikes midnight and you really should go to bed so you aren’t a zombie at work the next day.

The book explores how humans might behave when they are faced with simply surviving day-to-day. The world Granger imagines is really one where tragedy enhances people’s personalities. Those who are kind become even more kind. The scared become terrified. The bullies become terrifying. I couldn’t help but imagine how I might behave in such a world. Yet, Kat has no time for philosophical thoughts, let alone arguments. I can sense there are coming storms for Kat and Dylan, which will force them to face them.

It is easy to keep reading, not only because of the action, but also because Granger has written this book with straightforward prose. The style only helps to enhance the stark reality of a world with no rules, no law and no safety.

It was clear “World of Ash” is the start to a new series. There are a few threads left hanging at the end of the book. Kat’s journey is far from over. There is increasing mystery around the Pestas and the government’s response. This reader is eager to dig into the next phase of Kat’s journey.

7 thoughts on “Book Review: World of Ash by Shauna Granger”