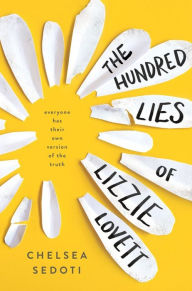 I’m not sure what made me chose this book. It may have been the cover, which is upbeat and bright, but broken in a way. The title, which is intriguing and alliterated (alliteration always appeals). See what I did there? Ha!

In the end, I choose to believe it may have been the book gods because this is one of those books which blew me away with every chapter. While it may be categorized as YA, the story drew out emotions in this mid-thirties reader which are universal if we all will admit it.

Before I go any further, a quick plot summary. Hawthorne Creely is a senior in high school, lives in a small town where everyone knows everything and she doesn’t have many friends. The book begins with the disappearance of Lizzie Lovett, THE popular girl from her older brother’s high school class. While Hawthorne has a few fuzzy memories of Lizzie from her freshman year, when Lizzie was a senior, the disappearance Hawthorne’s imagination and she begins to investigate some theories about where Lizzie Lovett might be. How could the most popular girl who had it all together just disappear while on a camping trip with her boyfriend?

While Hawthorne’s life is very different from my high school experience and my life now, Chelsea Sedoti was able to create a character in Hawthorne with deep emotion. Emotions we can all relate to no matter our age. So, there are plenty of ways Hawthorne and I are different, age being one of the biggies. But, I didn’t grow up in a small town or have small high school. I didn’t have my own car. I didn’t have an older brother and my mother was not a retired hippie. So, I’ll just get all of those things out-of-the-way.

Here are the ways I did relate to Hawthorne.

Loneliness. That feeling we all have at some point in life when we look around and wonder if anyone we know is really an actual friend. Sure, you may know a lot of people and they may know you, but who among them can handle all of your crazy if you let it out? Who among them won’t exploit the crazy? I really felt like Sedoti excelled at making Hawthorne’s loneliness and “isolation” a palpable element of the book. At moments, it brought me to tears, not in a bad way, but because if I’m honest, I have felt those emotions. They have been my companions at times. Whew. Deep stuff.

Perspective issues. Have you ever wondered what it might be like to step outside yourself for a while and watch your own life? What would it be like to talk with yourself, not as yourself, but as someone looking in at your own life? What do we miss because we’re too close to the forest to see the trees? Sedoti does a great job of giving peeks into what Hawthorne might be missing about herself through conversations with other characters. The mean girls in school or her one friend. Her brother and his friends. Maybe Hawthorne isn’t so isolated because of who she is, but because of the way she sees herself. I had very deep thoughts about this topic. Sedoti does an amazing job of using Lizzie’s life to prove there are many variations of the truth.

Curiosity and imagination. Hawthorne does not lack imagination. She sees the world through a lens where anything is possible. I was actually a bit jealous of her willingness to own her world lens and use it to dig into the Lizzie Lovett disappearance.

Now, one of the ways Hawthorne and I are very different is her bravery. Can you be in awe of a high school book character? Well, I was. I wish I had the bravery of Hawthorne. Did she sometimes do things that I knew wouldn’t end well for her? Yes. But, she was brave enough to do it. It made me want to be more brave in my own life today.

On all fronts, I enjoyed this book. Clearly, I’m a fan of Hawthorne, even when she’s acting in an immature way that won’t end well. The other characters in this book were interesting with facets and depth. The story of Lizzie Lovett’s disappearance helps to move the story along as Hawthorne figures out life. Note: we do find out what happened to Lizzie. The resolution of this mystery helps to drive home the end of the book. Who was Lizzie really? Who are we all really?

I encourage readers to pick this one up and meet Hawthorne. An intriguing plot is supported by great character development and emotional investment. I found I truly rooted for Hawthorne and her family.

Thank you to the publisher and NetGalley for a copy of this book for a fair and honest review.

2 thoughts on “Book Review: The Hundred Lies of Lizzie Lovett”

New glasses! I can see again! Tried a new color and shape. Loved a few of the @draperjames options, but these won the toss-up.
We’ve spent the weekend nursing a fever and nasty cough. I’m glad he’s feeling better. I’m not sad about the cuddles either.